This year I was very surprised and grateful to be invited to speak for the first time at one of the biggest IT conferences in Serbia - Tarabica # Conference. It was held at the Singidunum University in Belgrade on May 7th. I met some really great and interesting people there and had lots of fun in the process.

My presentation was titled “.NET Development Toolchain on Linux” and I talked about how you can make great .NET applications using great tools on non-Windows operating systems and also a bit about what is FOSS and how you can use open source libraries in your software. I also had a live demo of a .NET Core application running off my phone where my tinkering experience with GNURoot/Fedora ARM really paid off.

To start, when I was invited to be a speaker I only knew vaguely what I will talk about. I was terrified to think about how will I present to other people and what will I talk about. Really nervous. I had a very good idea about the first part of the presentation (tools for .NET development) because I was very familiar with the subject, but the part about open source had me worried. I brought up Tarabica on our bi-weekly Fedora Ambassador meeting where I asked fellow Fedora Ambassadors how they usually present about what is FOSS and how to use it. I immediately witnessed how amazing and well-oiled machine the Fedora Ambassadors mailing list is. Firstly, I was immediately sent (via some wicked fast air-mail) 30 Fedora Workstation DVDs to hand out! (Thanks Emmanuel!) Secondly, because we needed a place to write out some talking points about FOSS the Why FOSS? page was born. Many ambassador contributed, even Matthew Miller, the Fedora Project Leader! Many thanks to everyone who wrote on this page and on the mailing list, it was a huge help to me, and I’m sure it will be of help to many others. You can see the image below with that specific slide from the presentation!

So armed with enough Fedora DVDs and some leftover swag from before, I was ready! Kind of…

Generous people from Tarabica organization decided to organize another full day of sessions the day before the “official” conference. The preconf day was held at Microsoft Serbia headquarters in Belgrade. The sessions were mainly targeted at system administrators and not developers, but I decided to go anyway partly because I was curious about what’s new in this domain and partly because I was curious about what does the Microsoft office looks like. (hint: it’s very nice) 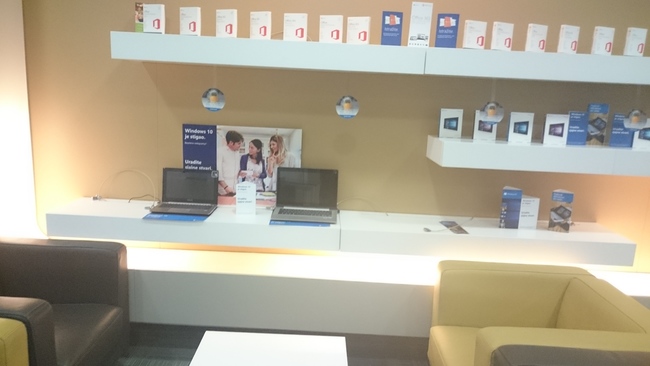 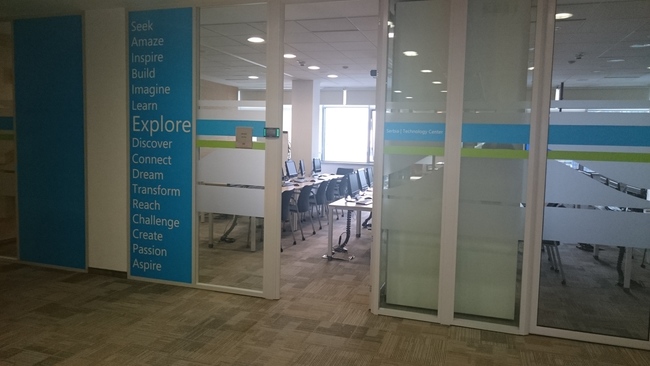 The presentations were really great! Especially, I saw some new virtualization stuff that I didn’t even know is possible so it really was useful. Granted, the presentations were really for system administrators and some of the stuff wasn’t that interesting to me, but overall it was great! There was also an excellent lunch and many million liters of coffee were drank. After the presentations, I shared a cab with some other speakers and went to a very nice hotel near the Belgrade city center which was paid for by the Tarabica organization. Sadly my meant to be roommate (who held an excellent presentation about Meteor JavaScript framework on the conference) didn’t arrive to the hotel so my stay got a bit long and lonely. I took a walk around the Belgrade city center but the rain seemed to be starting so I just stayed in my room and rehearsed my talk that night. The hotel itself was extremely nice with some very fast WiFi and a good hard bed. 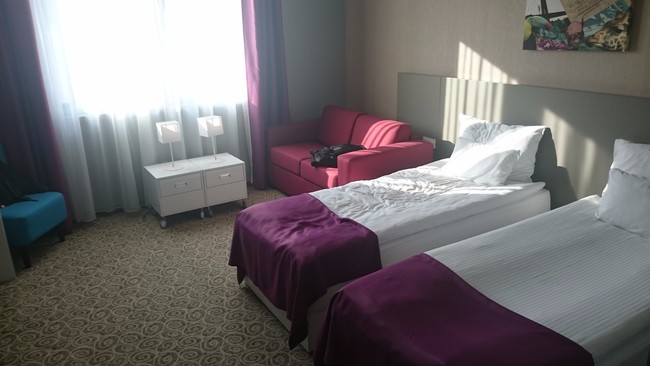 The keynote was at 9AM. All the speakers gathered before it, in the university library to setup and meet. If you ever get the chance to visit Tarabica I really recommend you do. The conference is awesome! It’s free, everyone is friendly, the food is great, and you can hear many smart people (myself excluded) talking about some new and interesting stuff. Also, don’t be put off by the usual “Ohhh it’s organized by Microsoft, I don’t want to hear about their stuff”, it’s really not like that. Yes, there are a lot of Microsoft technologies displayed, but if you look at the agenda, you can clearly see that there really is something for everyone! So it doesn’t matter if you are a developer, system administrator or you just like to use Office, there is going to be something interesting for you. It’s natural that the conference “focuses” on the Microsoft stack when you realize how many Microsoft MVPs and experts were around. The conference was really well organized, there were literally no delays, and everything went buttery smooth.

I mingled a bit during the others presentations and attended quite a few of them. I met some of the best developers in the area who were very friendly to me. I think I was the youngest speaker there and I got a lot of really helpful insights and advice.

I got the last slot (from 4:30PM to 5:30PM) and my nervousness really grew as time was coming for me to speak. If you never held a talk before, it really is true what they say, your hearts goes into maximum attack, your palms get sweaty and your voice trembles. The nice part is, when you actually start talking it all goes away! Or that’s just in my case. I rehearsed my talk a couple of times, and just went to “autopilot” when it started. My friends who attended the talk told me later that I went a bit too fast in the first part but that I was great afterwards. The entire presentation went great, I had a few fancy animations and pictures and even though I thought that the audience will be tired and sleepy they seemed like they were having fun. I briefly talked about OSS licenses and about the Awesome .NET list which I was surprised to hear many people didn’t know about. I also tried to slip in a few jokes but I guess I was too nervous to do it right (or they were very bad, like all my jokes). I also have to mention that I had an amazing experience with presenting from Fedora and LibreOffice. Just plugged in the projector and everything set itself up, I didn’t even have to touch the settings. LibreOffice Impress is fantastic I have to say, I love the presenter mode where you have a small clock and a timer at the bottom of the screen and current and next slide displayed while the slide is shown normally on the secondary display. Really I was IMPRESSed. (warned you about the bad jokes) I had a few questions by the audience, to most of which I answered decently (I think) and I handed out EVERYTHING I had, all the swag (Fedora stickers, badges) and all the DVDs. I think everyone got something and people really liked that they got stuff for free. 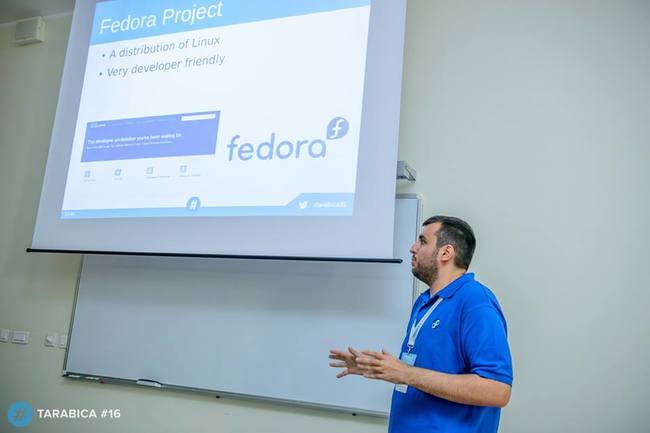 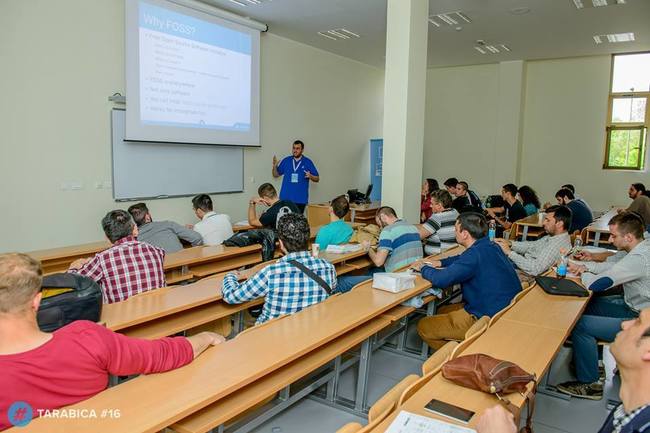 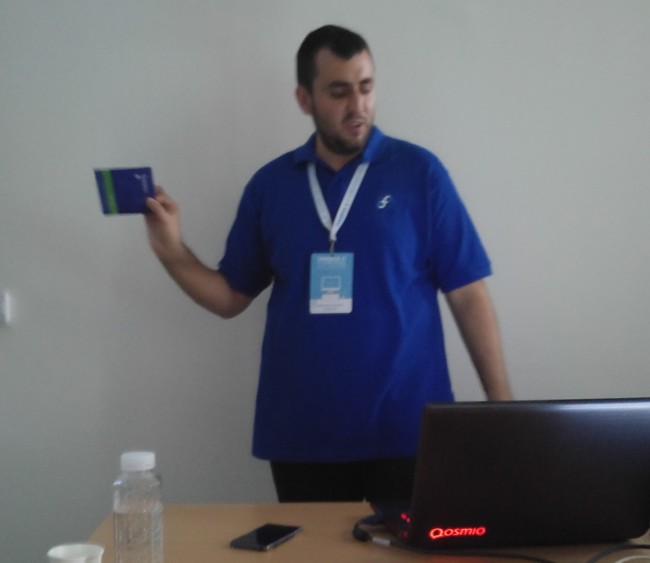 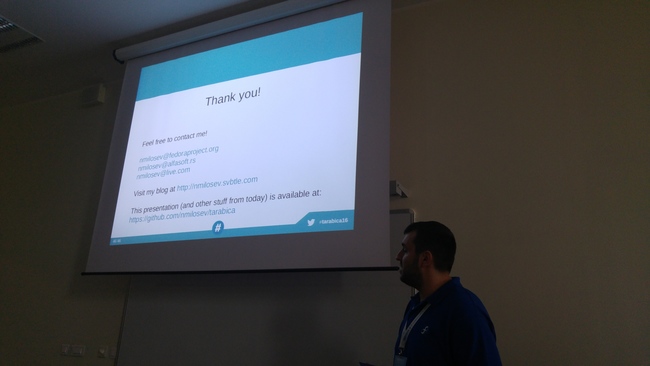 As you can see, around 30 people attended which I was really happy for and more than I expected, especially when you take into consideration that there were six other talks in the same time slot and that it was, as I said, the last time slot. As for my demo of how you can run .NET anywhere, even from your phone, it went great! I made a small web application with a small survey about the presentation and showed everyone how you can really do awesome stuff with the new open-source .NET using a Fedora 23 ARM chroot. The only issue I had was the tethering from the phone part, because you can only have ten clients at the same time. But I really was lucky, and everything worked rock solid. I told the audience that it is my first presentation and I got some nice comments through the demo app itself. I also said that they can get the slides and demo app source at GitHub which was well received.

After the presentation / conclusion #

After I held my presentation, I realized how tired I was. It really didn’t come to me how difficult it can be to speak for an hour without stopping. Also, lugging around very heavy and powerful 17" laptop during the entire day didn’t really help. On my way to the conference end-note I was approached by some members of the audience who told me that I was great and that they couldn’t tell that it is my first presentation which really meant a world to me. On the end-note there were a few gifts for the audience, some network routers and smartphones which was also very nice from the Tarabica people. After the conference there was also a speakers dinner which sadly I couldn’t attend because I had to hurry back to Novi Sad.

I want to thank people from Tarabica for having me and to apologize to some of them for spamming them with stupid questions about the organization. I had a really great time there and I really hope they will invite me again. Also, big thanks to all the Fedora people who helped me with my talking points, it really was super helpful.

Thanks for reading this report, I realize it’s a bit different than my other “how-to” posts.

I wanted to try running Fedora outside of chroot on my Chromebook. Because I didn’t want to mess with the complicated ChromeOS partition structure I decided to install Fedora to a USB flash drive. The USB drive # I wanted to get a nice... Continue →