I am just sitting here, unsure how to start to describe probably the best conference I have ever attended! I was given the privilege to attend the biggest Python conference in Europe, meet the Python community, see what is new in Python world, and the best part was that I was representing Fedora Project.

Five days, hundreds of smiling faces asking about Fedora and Red Hat, great food, the ocean, the beautiful city, everything was there!

Here follows my personal event report, and I will try to keep it short, but no promises! :) 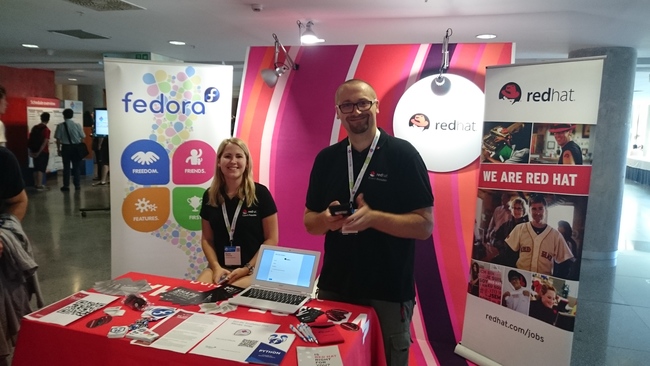 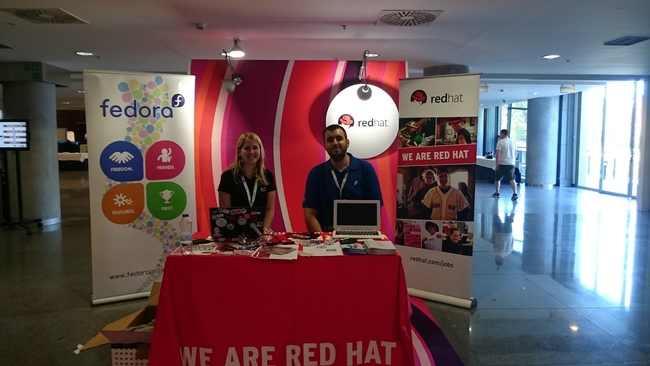 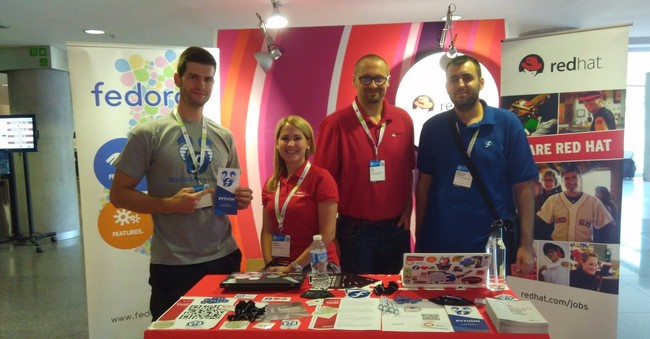 Fedora (represented by Michal from Red Hat Brno and myself) was sharing booth with Red Hat, which was great because when someone is interested in Fedora, you can also talk to them about Red Hat and vice versa.

Jiri and Marta, recruiters from Red Hat Brno were amazing. You can clearly see that they are really good at this sort of stuff. They came with four (I think) big boxes of booth materials, swag and all sorts of goodies which really made our booth stand out. In my opinion (which is clearly biased), we had the prettiest booth on EuroPython. Jiri and Marta were also very well-informed, even about Fedora, and they answered tons of different questions. They also had a form which if you fill in you get informed about job offerings at Red Hat, which was extremely helpful.

The first day of the conference was a bit crazy. We had tons and tons of people coming and asking all sorts of different questions about jobs at Red Hat and about Fedora, of course. I was surprised with many question about running Fedora in a container (with project Atomic) and especially with my favorite Fedora question on the conference - what does the hot dog symbolize in the development builds. :)

The other days were just a bit quieter, but still many people were interesed in what we have to offer. I don’t think there were that many EuroPython attendees who didn’t visit the Red Hat/Fedora booth at least once. :)

We had many “Fedora <3’s Python” t-shirts, so Michal came with an idea to make a Fedora Badge and whoever shows it to us, gets a t-shirt. Fedora badges server was a bit slow, but in the end I think we handed over about 100 t-shirts. :)

Also, the Python Developer Guide to Fedora flyer was really, really well designed and beautiful. We handed a lot of those. They were also very informative, I was amazed how much information was on that one piece of paper. Really good job by the designers!

I met quite a few Fedora users, and I’m proud to say that I think that I convinced a number of non-Fedora users to give it a try. The questions varied from the usual ones: “Why Fedora over something else”, “What is the relationship between Fedora and Red Hat” etc. to the advanced ones like: “Does Fedora ship security patches separately”, “What parts of Fedora are written in Python” and similar.

Overall, it was awesome being with Jiri, Marta and Michal on the booth, although tiring at times. I loved the experience of talking with many people about Fedora and how it can work for them. Our “first door neighbors” were awesome guys from TravelPerk (business travel organizer webapp) and JetBrains which I annoyed with many questions and was given many awesome stickers!

EuroPython 2016 was held at a beautiful venue called Euskalduna Conference Center. You could immediately tell that it is really made for big conferences. It was really well thought out.

I attended a few talks when the booth was a bit quieter and when Michal was there. I really loved the talks on Friday about deep learning and neural networks, and I found them really informative. Also I attended some really interesting talks like, how Disney uses Python, how can you use Python to recognize musical notes, how does LIGO (the gravitational waves research lab) use Python and others. The quality of the talks was really high, and the speakers were always there afterwards to answer all the questions.

The conference was really well-organized with many side events like a visit to the Cider house, a Pintxos night, Pokemon Go contest, micro:bit giveaways etc. Every day there were short announcements followed by a keynote and then the rest of the talks, workshops and trainings. There were also Lightning talks at the end of each day which I sadly only attended once. Also, everyone got a goodies bag with a beach towel, conference guide, one micro:bit (wow!) and many other stuff, which was very nice!

The Python community is really amazing. Everyone is friendly, helpful and willing to talk about great variety of subjects. It’s really easy to just go and talk to someone, and I loved that!

On Saturday and Sunday, there were also sprints at a different venue - pictured above. The concept was new to me, but I really liked the idea of many developers just getting together and working on stuff. Sadly, I had to leave early to pack for my return trip.

Bilbao is awesome, no other word for it. It’s probably one of my favorite cities ever. By architecture, it is a mix of modern and old, similar to Budapest, Vienna and the rest of big cities in Europe, but the feel is completely different. City’s small streets with many local shops, many bridges (some very modern, some ancient looking), bits of modern art everywhere around the city, really set it apart. And the people are very different (in a good way). I have never experienced a big city like Bilbao to be so calm and relaxing. Honestly, you have to visit to see what I’m on about! No one is in a rush, or shouting, or angry. People drive slowly, stop in the middle of the road to say hi, block the entire street, and still no one, and I repeat absolutely no one is angry or rushing them or anything. You always hear these horror stories about tourist cities where everyone is trying to “get you”, well with Bilbao it’s completely opposite. It could be that it is more business that tourist city (by the number of museums, sights, cafes it definitely isn’t) or it is just the calm and relaxed people who make it that way. You get a sense that someone, a long time ago said, let’s make a city and do everything right. It’s not directly on the ocean, but the metro will take you to the beach of your choice in less than 30 minutes. The buildings are mostly low, with the exception of few skyscrapers. The city is astonishingly well connected, with metro, buses, tram and taxis. The airport is behind the hill (with a tunnel underneath) so the noise levels are minimal. You get the picture, I hope. :) 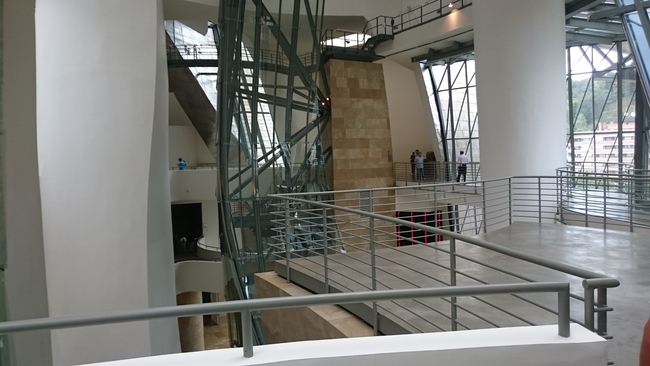 I also visited Guggenheim museum (pictured above), with the ticket kindly provided by EuroPython organizers at a discount. Although I don’t know anything about modern art, there were a few paintings that I really liked, and the building is amazing. It’s rude to say it, I know, but the building was more artful to me that anything in it. It’s probably just me not understanding anything inside, though (including how the elevator works)… 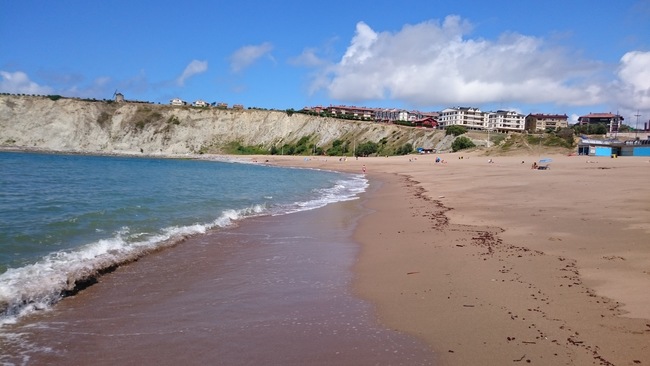 After the conference day ended, on Friday, we visited the beach. You basically take the metro and just exit when you can see the sea. Very easy. The beach pictured above (just a few hundred meters away from the Bidezabal metro stop) was breathtaking! I have never been to such a long, clean and beautiful beach. It isn’t even the largest one, but someone on the EuroPython Telegram group mentioned it (thanks!) so we decided to visit it, and it was awesome.

Obviously, if you visit Bilbao, you will have to try pintxos! They are everywhere, in almost every bar! Pintxo is like a sandwich evolved, they are big, and extremely tasty. You can have them with everything, sea food, ham, cheese, anything! I think I can safely say that if you ask any of us we would all recommend a small bar called La Sonema, where we had some of the best pintxos ever! And also, a beer with your pintxo is a must.

I have to mention, that this was my first time “changing planes”. It’s really much less scary than everyone is saying - at least for me it was. You don’t have to worry about your luggage (at least with Lufthansa), and if the airport where you are changing planes is well organized (like Munich was) you can probably get from one end to the other in about 20 minutes. My first flight from Belgrade to Munich was delayed for about 25 minutes, and I still made it (even though I had to pass through two scanner gates - non EU stuff) in time to the second one, despite having only 45 minutes to change planes. So, my advice is, follow the signs for the gate, don’t be nervous (like me) and you will get there on time quite easily. On the return trip, I even had to get on the train underneath the Munich airport to get to the other terminal (which was scary) but still made it, with time to spare.

I was in a very nice AirBnb apartment which Michal found about 10 minutes away from the conference venue. We were staying with Slavek and Petr from Red Hat Brno (awesome guys!). I had some issues with my bed the first night, but the guys helped me get another one from a different room, and everything was great afterwards! We even had couple of big supermarkets near, so everything was very easy.

Python community is awesome, and I had a blast at EuroPython 2016! I learned a lot of new stuff, including how to make these:

A small update. I wrote a small shell script which can set up a Fedora chroot anywhere (get the name now?) where a compatible kernel is. This means you can use minimal Fedora shell on almost any other Linux distribution. Here is the... Continue →