Chrome OS running in VMWare Workstation like a charm. 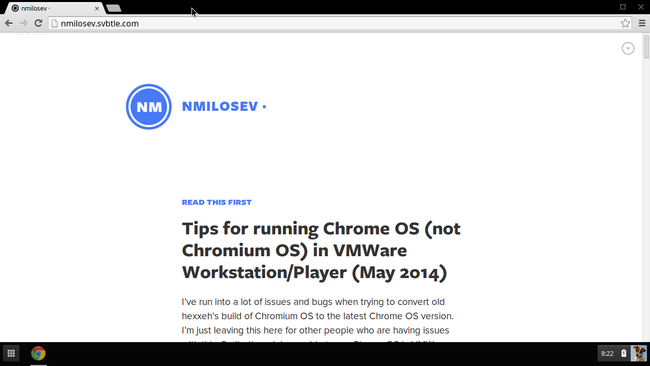 I used this script instead of 4suhf:

And I don’t know why, but it worked like a charm with image #1 (Lenovo 2GB)
Had to increase VD size and resize and move last two partitions with GParted ISO.

Tutorial can be found on this blog.

I’ve run into a lot of issues and bugs when trying to convert old hexxeh’s build of Chromium OS to the latest Chrome OS version. I’m just leaving this here for other people who are having issues with this. Sadly, though I was able to run ChromeOS in VMWare Workstation, I couldn’t login because (I suspect) Google’s server isn’t allowing users without legit hardware ID to login. Anyway, maybe someone smarter than me can overcome this. If you do be sure to contact me since I would love to try ChromeOS in a VM.

doesn’t do anything useful except for wiping the “device” before booting for the first time, you can achieve similar results by Power Washing (CTRL+ALT+SHIFT+R)

If you’re getting kernel panic, upgrade your VM to Workstation 10.x hardware compatibility, and change your HDD controller to be SATA.

Not enough space or nothing happens on boot #

Resize your virtual HD to 20 GB from VMWare and use GParted Live iso to resize the last two partitions. Latter recovery images are large, so you’ll have to do this if you want latest image.

Use NAT and add this line to the VMX

No fix for this, sorry. I’ve tried to change the timezone (there is a tutorial on this), but it seems this isn’t the issue. Probably wrong hardware id is reported to Google login server.

Which image should I use? #

Use Lenovo Thinkpad X131e 2GB (number 1) if you are trying to recover the standard way. Some notes here too:

I thought that latter images broke login, so I tried to get older recovery image from here:

I used this image with modified 4suhf script (just unpacked .bin file from the archive and injected it in the virtual drive along with modified script) because it was working as reported 6 months ago in this tutorial:

Sadly all this effort was wasted, since I just got stuck again at login screen. So definitely server is refusing to work.

You could try to use crosh, but from my experience standard console is more reliable.

I am in the process of building a self-driving RC car. It’s a fun process full of discovery (I hate it already). Once it is finished I hope to write a longer article here about what I learned so stay tuned! While the electronics stuff... Continue →